There are fully immersive experiences popping up all over the country where you can step into a live video game.  Imagine you could go to a venue and physically step into a new world, being transported into a story combined with state-of-the art VR technology, physical stages and multi-sensory effects, including touch and smell, with Hollywood characters and storylines.  Welcome to location based entertainment (LBE).

What is location-based entertainment?  The term LBE is applied to a whole group of entertainments, such as theme parks, large scale arcades, bowling alleys, pools, water parks, casinos, movie theaters and many others. Despite the fact that it would be logical, sports are usually not referred to as location based entertainment. 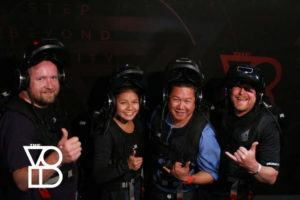 Cinemark is the First US Exhibitor to Launch an In-Theatre Hyper-Reality Experience with Star Wars: Secrets of the Empire – Opening Sept. 22  This LBE theme park is where visitors would go for playing high-end multiplayer interactive computer games.  Check out the details here.

Two-Bit Circus is a company turning the tables on the traditional amusement park.  Read about them here.

The Location Based Entertainment industry is becoming a driving force not only for VR entertainment but virtual reality in general.  A consumer will be more likely to purchase VR gadgets for home use if they try a VR experience in an arcade.  The VR arcade is currently in its infancy, but as the boundary between the home VR and the LBE is slowly erased, virtual reality arcades are likely to disappear as their predecessors.  Of course, this won’t happen for quite some time.