5G internet is arriving. This will have an effect on in-home internet, smartphones and entertainment.

In-home internet: Revenues from sales of home networking options, including Wi-Fi routers, mesh network solutions, broadband gateways and 5G home gateways, will total in the billions.  Of this, 24% will be attributable to 5G devices. As well as representing homes free from the local cable/satellite monopoly, the majority of these homes will likely be heavy Internet of Things users, with advanced smart homes. 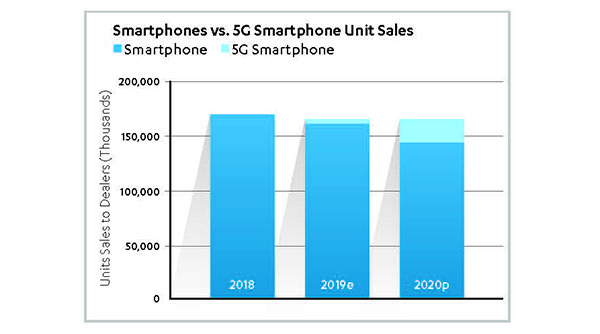 Smartphones: 5G smartphones are predicted to boost the total number of smartphone sales.  At least 10% of smartphones sold will be 5G handsets.  Early adopters won’t be spending the extra money on a handset just for show. They’ll use the lightning-fast speed to drive demand for the emerging cloud-based technologies, likely for playing video games, which used to be limited to consoles or high-end PCs via the cloud.

Entertainment: 5G networks will have an impact on all aspects of entertainment. As 4K UHD content becomes more common, 5G download speeds means mobile viewers will not have to settle for a downgrade in quality as they watch. 5G also means that cloud based subscription gaming services don’t have to be tethered to the home.  Virtual and Augmented Reality (VR/AR)-based technology will be boosted by the rise of 5G, as download lag times vanish.

There is a hint of urgent and perhaps forced optimism within News organizations for Virtual Reality.  As traditional journalism outlets try to figure out how they can recapture audiences they have been losing to the proliferating sources of news in our increasingly fragmented media world—why pay for it when you can get the news for free on your browser or Facebook feed?

In this light, adding a new exclusive VR feature to the suite of services offered by the likes of the New York Times may be one way to address the financial woes that have beset the ailing news business. Check it out here.

See how ESPN and ABC have incorporated AR into sporting events. Check it out here.

That said, this technology seems too big to be restricted to your smartphone’s screen or a pair of glasses. 5G will make for a better AR experience due to the reduction in loading times.  Increased internet speeds means we may see a real boost in AR adoption in 2021.  Areas such as retail, which may use AR to project new clothes onto the user, and beauty could be first adopters of the tech from a consumer standpoint, as could TV shows and advertisers, with AR offering new ways for consumers to interact with a show or brand.

Where physical and digital objects co-exist and interact in real time. Mixed reality does not exclusively take place in either the physical or virtual world, but is a hybrid of reality and virtual reality.

There are many practical applications of mixed reality, including entertainment, military training, and remote working. There are also different display technologies used to facilitate the interaction between users and mixed reality applications.